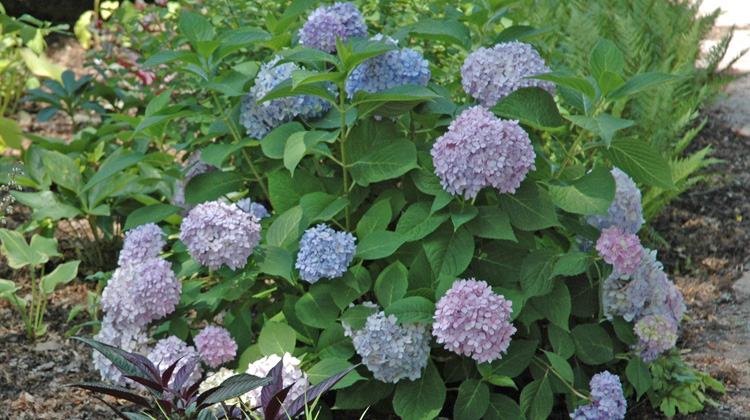 No Flowers on Endless Summer Hydrangea

I bought two Endless Summer Hydrangeas last year and they bloomed all summer with large beautiful blue flowers. This year I had large beautiful leaves and no flowers. I added Miracid to them hoping that would help them bloom, but it didn’t. They get morning sun until about 1:30 pm in the afternoon. How can I get them to bloom next year?

Lack of flowers on the Endless Summer hydrangea was a common complaint from gardeners with relatively new and established plantings. The plants seemed to thrive they just didn’t bloom. Fluctuating winter temperatures killed much of the top growth eliminating the first flush of blooms that form on old wood. Heat and drought may have damaged or prevented the formation of flower buds on new growth. Those with second year plantings often see little or no bloom. The new plantings spend their energy putting down roots instead of flowering. Once established they return to the flowering mode. Avoid excessive and high nitrogen fertilizer that can encourage leaf growth and discourage flowering. Stop fertilizing and acidifying treatments in July. Late season fertilization encourages late season growth that can be winter killed. And be sure the plants are properly watered all season long. I found those that received sufficient and regular watering flowered better than those that were somewhat drought stressed.

Start a New Garden this Fall